The Seychelles is a dream destination for almost anyone who visits, and for good reason. Situated about 1500km off the coast of Kenya, you're going well out of your way to get there.

For those that do visit, the majority sit on the beaches, looking out to sea. While beautiful, this misses the true beauty of the islands, which is to be at sea, looking back to land. Unlike coral islands, which are usually flat with reefs that keeps you far off shore, these are tall islands, with white sandy beaches and steep forested sides, peppered with large granite boulders.

The islands are big enough to have all you need, yet small enough to be able to see them all in one trip. Unlike many of the islands of the Caribbean, the interiors were beautifully maintained.

Mahe is the largest island within the Seychelles, and the starting point for our trip. Also on our itinerary were La Digue, and Praslin, the two other larger islands, and a raft of smaller islands to stop for lunch, and a swim. We were due to be ten days at sea, so had a good mix of short and long days on the water. Like many trips, most of the hard work is done before you leave the dock on the first day, and all credit to Stuart for having put it together. We were 25 sailors, chartering two monohulls and one catamaran, so there was no end of logistics to plan. Like all plans, they need the flexibility to alter where needed, and at times we needed.

The following is a rough overview of where we visited along the way:

The intention was to leave Eden island, (the marina on Mahe we joined the boats), on the first day. This was dependent on the handover going smoothly and timely. A testament to good skippering is making the hard or unpopular decisions that are sometimes needed. Two of the boats had issues that were felt too serious to leave harbour, and so, remained in port until the charter company rectified them. Our boat, Sebon (the catamaran) did manage to get away, but just motor around the corner to Sainte Anne Island. We anchored off the south side of the island, and went for the first swim of the trip, in the clear blue 27 degree waters.

This was to be one of the longest days on the water. We all headed off as soon as breakfast was had. Sadly, there was little wind, something we were to experience on many of the days during this trip. Praslin was about 40 nm to our north east, and our intended destination was Anse Lazio a beach on it's north west coast. The trip up was uneventful, and we anchored into bay Chevalier. While there are many protected marine reserves in the Seychelles, between the island is open game. It is here that Lagan (one of the monohulls) recorded it's first tuna catch. We had intended to all dine together in a beach restaurant, but the waves breaking on the beach made that impractical, which we learned the hard way. Dinner was had on board instead.

Leaving beach Anse Lazio, the fleet separated to explore the area and undertake a few remaining tasks. Sebon went east between Praslin and Curieuse Island, and stopped in Laraie bay for lunch. Some crew took the opportunity to explore ashore, exploring La Valle de Mai and it's unusual flora and fauna, and others snorkled the area for the afternoon. We had crew and a dinghy to collect, so Sebon, popped straight over to St Anne which was to be our destination that evening.

We left St Anne and went west to North Cousin island in the hope of getting ashore to see the tortoises. We were too late; they have a cut off of people entering the island at 10am, so we headed out back around the west of Praslin, to the south of Curieuse island on Anse st jose beach. Great snorkling off the west side of the beach on the coral heads about 40m off the land. After a swim, we moved around the corner to Laraie Bay which was to be our resting anchorage for the night.

The monohulls also returned to Cousin and made it on time. Their crews were taken ashore in long boats with a thrilling beach landing. Exploring the island with its unique birds and tortoises was wonderful, even though they were accompanied by a large population of mosquitos. After lunch they made for La Raie bay, a comfortable overnight anchorage. Joined by dolphins at sunrise.

Leaving Curieuse, we headed for Les Soeurs, and anchored off Grande Soeur's west side middle beach. Beautiful place great snorkling, and a stunning island. On leaving there, we decided to check out the snorkling at a set of rocks on route to the north area of Felicite to see if the life was good. Huge amount of dead coral, but good life under the boulders of Ile Aux Cocos, and Ile Platte. Afterwards, we headed back to St Anne on Praslin to pick up ice & supplies. We then left St Anne, and headed for La Digue and anchored near Pointe Ma Flore, in the south east of the island. Lagan made for Anse Volbert for some rigging repairs and took lunch in a beach side hotel before making for Anse Cosos on SE of the island joining the rest of us.

With an early departure, we skipped around La Digue to La Passe, its main marina, and moored up, laying an anchor and putting stern lines ashore. La Digue bans all vehicles except for essential supply vans, electing to use bicycles instead. We all hired bikes, and spent the day exploring the island, and its beaches. There was a good swell coming in on Grand Anse beach, so body surfing was called for, followed by a lunch and a couple of beers in the cute little beach bar. It's a wonderful place, and the best part of the trip in my book. We finally managed to all be in a restaurant together, so stayed for the evening, eating at the Fish Trap restaurant. 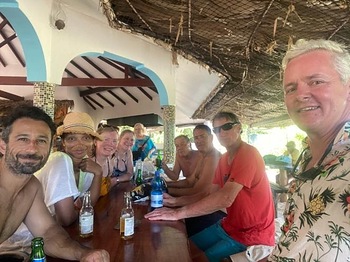 We left Le Digue, and went back to St Anne to pick up laundry. It was time for a new set of sheets. We had a lazy afternoon, and tried to get to the east side of Round island. As we couldn't find a good spot to anchor due to the prevailing swell, we went to the west side of round island, didn't find a good spot there either as there were restricted anchorage, (being ignored by some other naughty sailors), so we headed back to the entrance to st anne, and moored up for the evening

It was time to leave the Praslin area, and head back in the direction of our base. We left early, and headed straight for Mahe. We again were covering about 40nm of open water, so all the boats got out their fishing gear, with varying degrees of success. 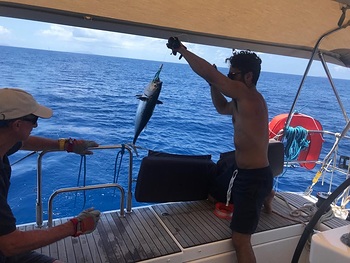 While some were pulling lines for smaller fish, others had designs on a monster from the deep, so pulled a larger bait 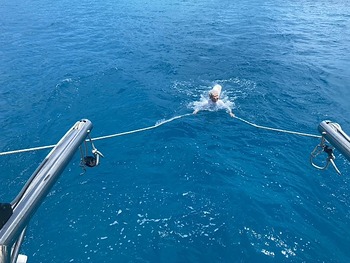 On reaching Mahe, we went around the south of the island and ended up in Baie Lazare. What a lovely spot to end a good day on the water. On route to our destination we passed Police bay, which was completely unspoilt and left as nature intended - so beautiful. That evening we had dinner on board, and feasted on the successful catches of the day.

With only two days left on the water, we continued with our circumnavigation of Mahe. We left Baie Lazare after breakfast, and had a straight run north up to Port Launay. Having arrived nice and early as our destination is within the marine reserve, we set the anchor, and got the snorkeling kit back out for the afternoon. Sadly the visibility wasn't great.

Our last day on the water, so we had to make the most of it. We stopped in Baie Ternay as we went north around the top of the island, as we heard it had great underwater life. Beautiful little spot, and lots of fish life. Then around the top and down on the east side to Palm Trees Ile Moyenne, for our last bit of snorkeling for this trip, and had plenty to look at. From here we headed back to base, to start the hand over procedure. The staff at Dream were very helpful with flight check-ins for anxious Corinthians returning to an uncertain world. They even extended the invitation to be able to stay on the boats if our flights were cancelled.

The last supper was held ashore on Eden Island, and was a fitting end to an otherwise great trip.