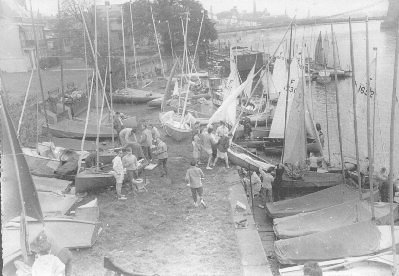 In 1894 LCSC was established by a group of sailing enthusiasts who launched their boats from Bell Steps, beside the Black Lion pub and close to the Hammersmith and Chiswick border (giving the club the Black Lion ensignia). In the early years the members were all men and used to meet at each other's homes to discuss sailing matters.

This stretch of the Thames tideway was also originally home to the London Sailing Club, who rented a clubhouse directly on the river between The Dove and The Rutland pubs. 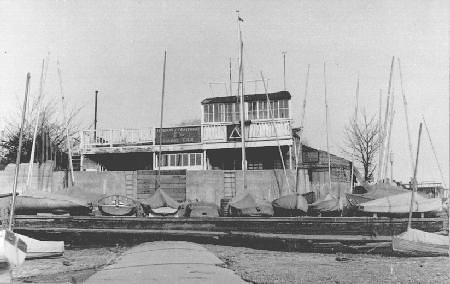 When the London Sailing Club moved down river towards Essex, the Corinthians were offered the lease of this building. Boats originally were moored on the tidal water.

For the first 40 years or so members built and owned various designs and sizes of boats and a complicated method of 'handicapping' races was devised. During the Second World War the club was asked to provide boat and sailing training for the RAF. Dr. Olaf Bradbury also started celestial navigation classes about this time and today the club is the premier West London centre for shore based navigation classes. 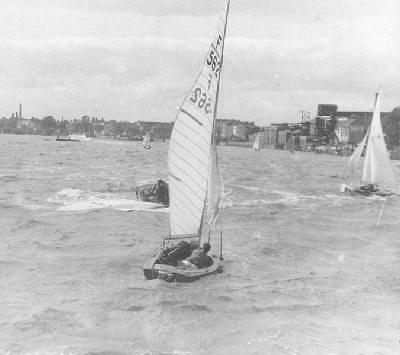 After the Second World War the club grew in popularity and became very influential in dinghy design and racing. The LCSC has long associations with Uffa Fox and Jack Holt, designers and builders of famous dinghy classes (Fireflies, Enterprises, GP 14's, etc.). Other classes 'at home' on this stretch of the water included Swordfish, International 14's, OK, Merlins, Cadets, Mirror and in recent years Lasers and RS200.

Unfortunately the clubhouse suffered severe bomb damage by an unmanned 'doodlebug' flying bomb during the latter part of the war. Repairs were undertaken, but the structure's days were numbered. Due to significant bomb damage surrounding the clubhouse the Hammersmith Town Council decided that the area should be razed and public gardens created (Furnival Gardens). 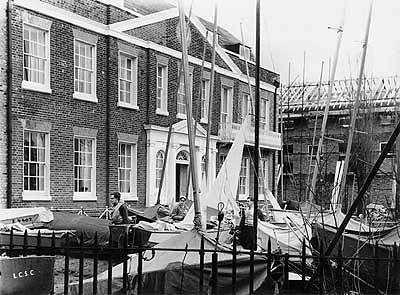 In the early 1960s the LCSC was relocated by the Town Council 200 metres up river to Linden House, a gracious Georgian building refurbished for our use. This new accommodation provided room for future growth and a superb environment for sailing tuition and social functions. Simultaneously, secure covered accommodation for over 100 boats was constructed beneath a development of adjacent flats. Launching ramps, spacious pontoons and a race officers' "starting box" were installed next to the river. 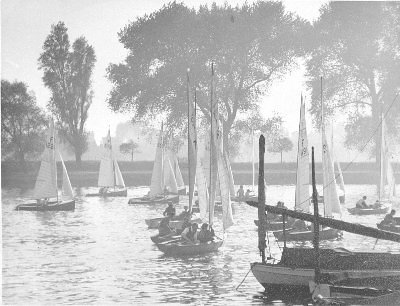 Throughout the years the LCSC has welcomed a broad and diverse membership. We were one of the first London clubs to allow women boat owners and sailors to participate in this hitherto 'male only' sport! Rupert and Lucas D'Oyly Carte the opera impresarios and musician Leon Goosens were former members. Athlete Roger Bannister, scientist and broadcaster Dr. Magnus Pyke and naturalist Sir Peter Scott all sailed at the club. The reformist MP and author of the popular novel 'The Water Gypsies', A P Herbert, was a solid supporter of the club throughout his life and his son John is a former club President. 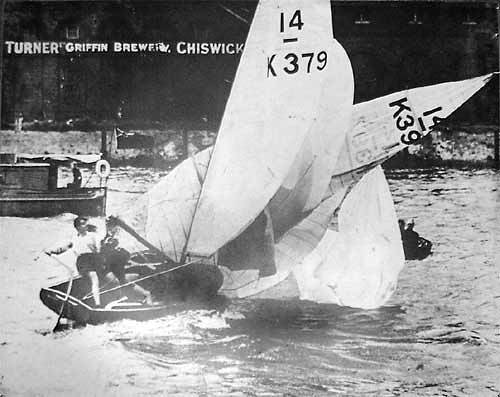 In the early 1990's it became patently clear that the club's landlord, Hammersmith and Fulham Council, was financially stretched and unable to adequately maintain Linden House. The LCSC was offered the opportunity to purchase the building and successfully obtained one of the early Sports Lottery Fund grants to defray the purchase costs and refurbishment of the structure. Matching donations were raised by the membership and in 1996 the club was in a financial position to proceed.

The Council procrastinated over the agreed sale and then announced they were considering relocation of the club elsewhere, with a view to selling the building for a higher amount once vacant. A successful media campaign instigated by the club in 1998 raised public and political awareness of the problem and the Council explored other solutions. It was finally agreed in 1999 the LCSC would purchase the building and share their facilities with a neighbouring rowing club, Sons of the Thames.

The club is committed to expanding recreational sailing and racing on the Thames and a number of initiatives are being brought forward to safeguard the long-term future of this sport on the tideway. In tandem the club has developed a comprehensive offshore programme for those who want to sail further afield. 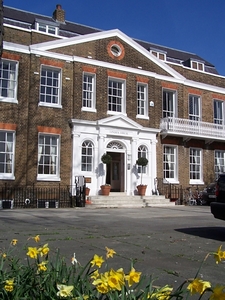 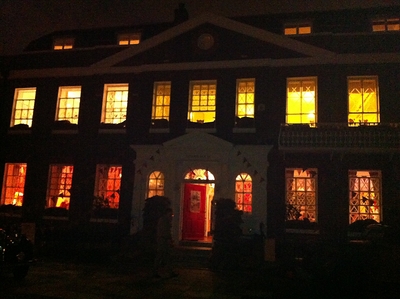