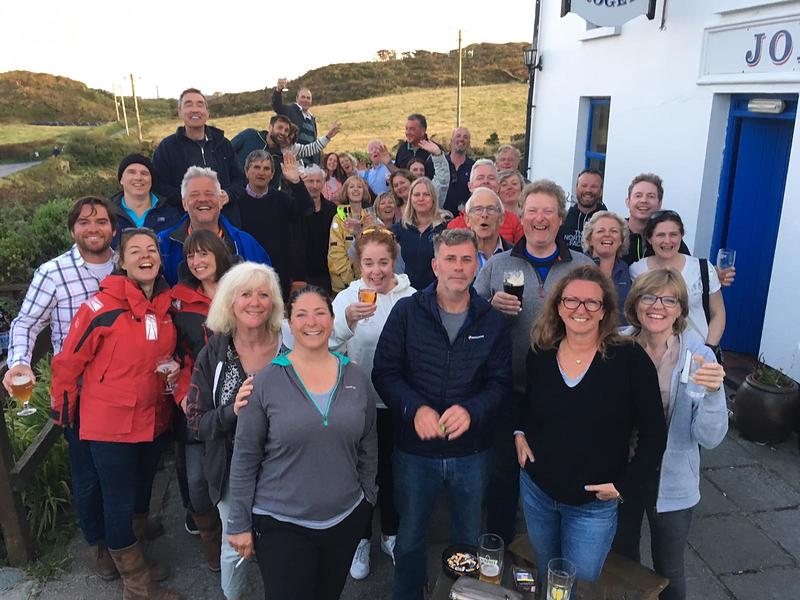 Skippers Ray Campion and Peter Ryan led the charge, braving challenging conditions to sail with their crews from the UK to Baltimore on the west coast of County Cork. There they met with three more boat loads of Corinthians who collected their yachts (complete with delicious scones freshly baked by the delightful Mary from Baltimore Yacht Charters) and sailed across to the beautiful Cape Clear. Fitting all five Corinthian boats into the cosy harbour was no mean feat, and after completing the sailing equivalent of Tetris everyone was ready for an evening of good food, whiskey, porter and music.

We made the most of the sunny Sunday morning by sailing around Fastnet Rock; a great opportunity for those who completed this year's Fastnet Race to enjoy the sight at a more leisurely pace. Poignantly the rock is also known as Ireland's Teardrop as it was often the last piece of land emigrants would see when leaving to start a new life in America. Following an enjoyable sail, a pleasant evening was had by all at O'Sullivan's bar in Crookhaven, where guests enjoyed great food and drink and the dulcet tones of Derek and Seamus as they led the group in song.

The following day we embarked on a longer sail around Mizen Head from Crookhaven to the charming fishing port of Castletown-Bearhaven. Over the course of the 42 nm trip, the crew of Inishbeg were treated to the exciting sight of a minke whale, before passing around Bere Island and into port to sample the seafood and the local gin.

By Tuesday the winds had substantially picked up as the tail end of Hurricane Dorian headed for the West Coast of Ireland. Through choppy waters the crews made their way round to the picturesque bay of Derrynane, passing under Ireland's only cable car in the process. The day made for an exciting sail, with plenty of rocks, small islands and riptides to navigate around. Force 6-7 winds and persistent rain could not dampen the spirits of the lively Corinthians that evening (and into the early hours of the morning) as an epic party of all proportions was held on the deck of Inishbeg despite the best efforts of the weather.

Thankfully the skies cleared overnight leaving a beautiful sunny morning, giving the hardier Corinthian the chance to recover with a refreshing swim in the crystal waters of the Atlantic. The crews spent the day enjoying the beautiful Abbey Island, with dramatic cliff top views, golden sandy beaches, and the stunning ruins of a tenth century abbey. Appetites worked up, the group visited Keatings' bar for dinner and drinks and to enjoy an audience with local musician Pat Waters.

We bid farewell to Derrynane and set back off around Mizen Head again. Although the day started soft with a heavy drizzle it soon brightened up and the crews were treated to a day of sunshine with plenty of wind. While there were no further sightings of the whale, most of the boats were accompanied by dolphins and seals along the way. (The crew of Inishbeg had the added drama of their main sail ripping on route.) With warnings for a possible gale that never materialised we moored up for the evening in Schull harbour for some well-deserved sundowners.

Sadly Friday marked the last day of our sailing adventure. Determined to make the most of it, and with the sunshine continuing we stopped at the beautiful Barlogue Creek for lunch before heading back to Baltimore. One group of explorers took a tender over some seemingly gentle rapids to see the other coves, only finding themselves stuck against the tide on the way back. The passengers were dropped off on a spit of land so the tender could make its way round to collect them on the other side, but then it ran out of fuel! In the meantime a kayaker also became trapped by the rapids and the group were able to help her carry her kayak over the land and relaunch her on the other side. Thankfully one of the other tenders brought over some fuel and all were able to make it safely back to the boats.

After that excitement, we made our way back to Baltimore to moor up the charter yachts for the final time and meet with some of the additional crew coming to sail T.C. and Oarsome Dream back to the UK. We all crossed over to the gorgeous Sherkin Island to enjoy dinner at the aptly named Jolly Roger pub before visiting a quayside Baltimore bar where locals and Corinthians joined together in session- a fantastic end to a wonderful trip.

If you would like to take part in one of London Corinthian's upcoming adventures, keep a look out for announcements about the 2020 offshore programme coming soon.