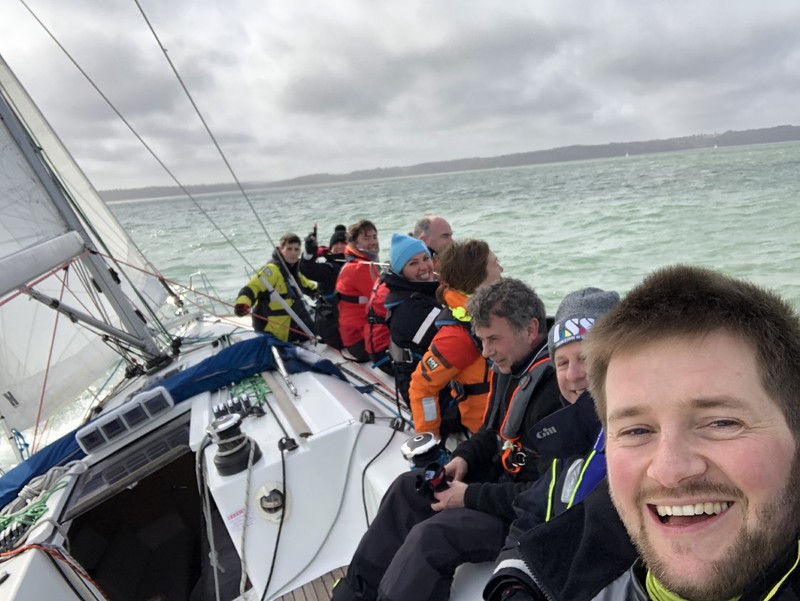 This weekend saw a 65/35% Sunsail veteran/never been on them before ratio roughly.

Take-Aways from this weekend:

Saturday morning saw one of the most punctual and well prepped mornings to start us off in the zone. With cracking conditions, starting at around 15 (gusting 20) knots and building throughout to 20 (27), we got 4 races in.

Sunday was a bit more punchy, although very varied, having had a good old blow out overnight, we saw 43 knots I think in one of the races and others we were in the low teens.

Having had a solid intro & briefing on our way out to the racecourse, we didn't hoist the sails until we got to the committee boat (anchored on the Ryde Middle Bank). The wind was pleasant and definitely worth a spinnaker, so we had many a discussion and run through of the hoist/jybe/drop procedures as many of us were on the rusty side.

Opted to go for the full mainsail, and from the course called out over the VHF sussed out a plan for the spinnaker leg (basically to avoid gybing initially)

The wind was up in the 15-20 knots so it was lively to say the least, 2 knots of tide ebbing West out of the Solent meant that the SWerly wind combo had full potential to create a spot of chaos at the committee boat end of the start line. Naturally, we went straight for the middle of it.

Whether it was down to our pure skill or a spot of luck, we had a blinding start, 3 boats were upwind of us with 20 seconds to go, a light reminder to them that they had no room as we came in hot and caused at least 2 of them to tack & gybe around while we trucked off on the go and with a 20-30 meter lead. 4024 who was a shouty bunch of children (Durham University) seemed particularly put out by this we would be seeing much more of them.

In a way, this race was the most boring, although a great confidence boost as we didn't see anyone else that race. We had a cracking beat upwind, little reaching leg where we prepped the kite, the kite went up and thanks to the tide against us we used it so that we lay the leeward mark without a gybe. We did try something a tad on the ambitious side as we approached the mark, the always fun, gybe drop.

Coming in fast on starboard to a port rounding mark, at 5 boat lengths we dropped the pole so went bare kite, things then got in a pickle so we went straight into a drop under the boom, jib not up yet, the boom came over as we gybed around the mark and then the kite filled into the main which was very manageable, although visibility wasn't at its best. Jib came out and then it was upwind to the finish, casualty and stress (mostly) free.

Figuring how well the last start went, how hard can it be to do that again It was all going very well as we controlled the fleet who all started ambitiously upwind of the starboard end, 4024 wanted revenge and as we both flirted aggressively, they bore away to try and get under us, we copied them although with a first-time mainsheet trimmer not quite understanding that "dump the main" means "can you please let that out really rather quickly", this ended up with us not managing to bear away and the children did indeed get underneath us and return the favor of the first race

After a tack/gybe 360 round and over the start line in last place, we had a bit more work to do.

This race was a 2 lapper and had a shorter downwind leg. We somehow rounded the 1st mark in 3rd or 4th have gone a different way to the rest.

The wind had shifted a bit so we were going to have to gybe pretty sharpish (for the first time). The boat in front of us went for the gybe and straight into a broach as we were setting up, with an aim of not following their lead, we were slightly disappointed as the usual "KICKER OFF/ MAIN OFF/ POLE FORWARDS" etc We recovered quite quickly and by the time we got it down, we'd managed to lose 1 place but gained 2 so now in 2nd Happy days.

This was how it finished.

Competitive start with everyone judging the now slackening tide a bit better so 5 boats all hit the line at the go. A cracking jostle upwind ensued with a traffic challenge as some container ships dictated a tactic here and there.

The "highlight", of this race, was at the windward mark. Quite a few port/starboards were happening at the final approach to the mark, Colette (4X). We had tacked on top of a boat on Port to cover them and were sitting nicely on top of them, annoyingly a starboard boat was looking a bit iffy for us and certainly them. They went to duck this boat and did so with slightly too much enthusiasm I would say as it left room for us also to duck. There wasn't much room, but there was enough, however on the round-up, we were all hit by a 30+ knot gust and our dear friends to leeward rounded up rather aggressively, we swerved to avoid them (and the stern of the boat we were ducking and we all shared a moment of much-clenched bum cheeks.

We rounded the windward and spreading mark in 4th I think but decided against the kite due to the gusty conditions. The 3 boats didn't make this choice and regretted it. We goose winged for the mark and they faffed off all over the shop which put us in second at the rounding and for the finish!

To take the win for the day we HAD to beat the kids on 4024, so covering them off the start was the game and it worked the whole way through. We spotted a wind shift that worked well in our favor and this put us further ahead. The Cambridge boat on 4016 did us a solid (accidentally) by trying (and failing) to call stbd on us, but succeeding on 4024. This was the nail in the coffin and we held the lead all the way to the end.

This saw some mad condition changes throughout the day and unfortunately no use of the spinnaker due to some big gusts kicking around.

The first 2 races were copies of each other - we were a bit late for the start (but not as late as most) and spent the whole race being covered by 4024.

The last race was a great start line and saw many changes of position. At this stage I can't quite remember all the details but we had some very close moments with 4024, but they just got away from us and took 3x 1st to our 2x2nds on Sunday.