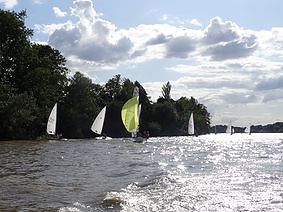 Wind yesterday was forecast SW 12 gusting 24, I recall, but the gusts were pretty damn constant. Course was 6, 5, 1 for 4 laps. With a spring tide, some wind over tide chop, RYA 1&2 Visions, several large pleasure craft and even an RNLI lifeboat under siren coming through, it made for really exciting sailing. The 6,5 reach, in particular, was literally and figuratively an absolute blast.

I missed the starting action as Andras rather perversely sailed me away from the line. All was explained when he asked me when the race was due to start. He had helped me off the pontoon and was starting late so I had to forgive him. By the time, I had made the line, I could see that Damian had got off to his usual strong start at the front of the fleet. By the top mark, Ben and I had managed to make ground on him and were in close second and third respectively.

As Damian stated, at any point, we were all 1 capsize away from losing the race. The downwind leg with strong gusts through unbalancing swell was particularly tricky. In a survey after the race, I counted at least 18 between us. 5 from Astrid, who had turned up without kit ready to help, but pluckily took the option to get in a laser for the first time in 20+ mph winds. She gave up eventually but major respect m'lady. Get down again soon.

And no, I teetered on the brink a few times, but strangely managed to stay upright which probably explains why I am writing this article.

We maintained good contact with Damian for a lap or two but, as in recent weeks, he was not to be caught at any point. Well sailed, indeed.

The pivotal point in Ben and my race came at the 3rd rounding of 6. Ben brushed the mark and to my eternal shame I found myself shouting "Touched". Ben duly did his 360 and didn't manage to catch me for the remainder of the race. Ben took my apology gracefully after the race but I can only excuse myself on the grounds that it was a demonstration of just how much I had the bit between my teeth in yesterday's conditions.

Ben finished in third. Felix in fourth. Andre, Paulo, and Andras will come back fighting in future races.

Mr Stoker and Tracey South looked after us well. With the Rowers partying that afternoon and some of the trainers also out. Sailing was followed by good company and a late trip to the Black Lion which goes a long way to explaining why I'm not back in search of silverware in great conditions today...

From Our Own Correspondent - Warren.