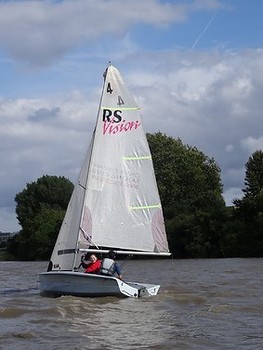 Despite the gusty conditions eight dinghies entered the race. The usual chaos occurred before the start but with the help of Clive Kitson, and the Deputy Race officer, Marian Desmond, they all launched - eventually. Just to complicate the Race Officer's life four Visions also launched, but only one of them entered the race, the rest went cruising.

The conditions were testing for the novices and even before the race started two Lasers capsized. The WSW wind was F3 gusting F4. The beat down to No 4 claimed a few more determined sailors. The Safety Boat, ably crewed by James Bourne and Alan Denney were kept very busy. They towed Manuel (?) back to the pontoon to fix his sail, which had parted company from the end of the boom, but once sorted he set off again to catch up the rest of the fleet. In between safety duties Alan took a series of photographs.

The run back to number 1 buoy was exhilarating to watch and that too claimed more capsizes. Four dinghies managed three laps but then retired, leaving five others to battle on. The Race Officer eventually took pity on them and shortened the race on the sixth lap. The race was eventually won by the Vision, sailed by Julien Castano, crewed by Anna O who acknowledged that they probably won because they were the only dinghy not to capsize.

All acknowledged that the race was fun, and it certainly was fun for the spectators. 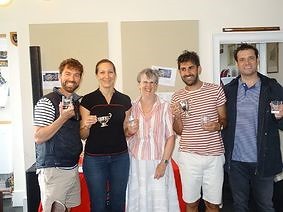 1st – Philip Moore (who was disqualified as he was not a novice).