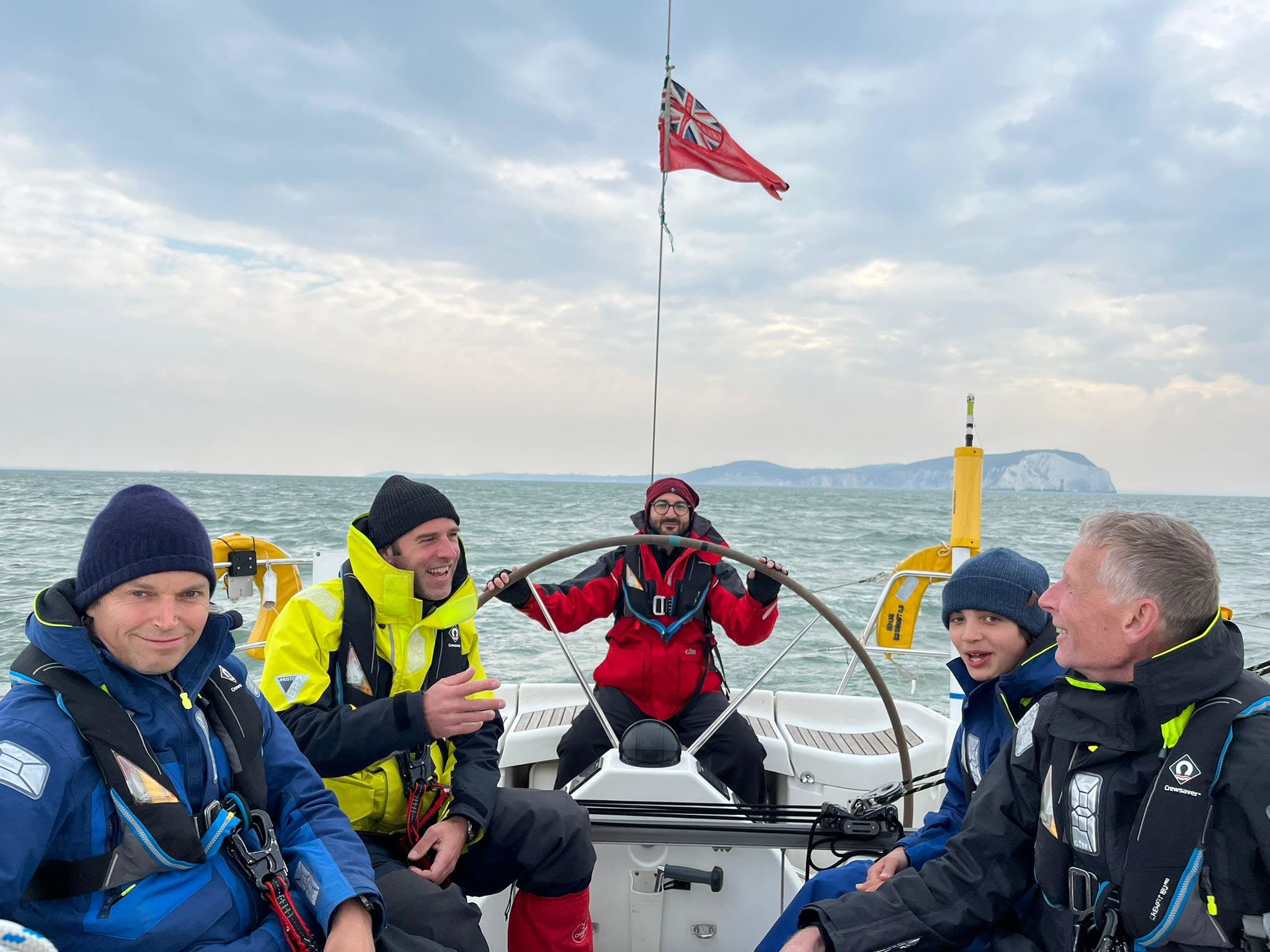 The first Mile-Builder of the season was going to be pretty straightforward. Head out of Hamble at 0500 (yep, we've all been there) to catch the tide; hang a right into the Solent; hang a left at the Needles; arrive at Braye in Alderney 10 hours later. We'd anchor up there and enjoy a night sail back home and slip into the Hamble river at dawn. Simple.

The only problem was the wind was blowing northeasterly, straight into Braye harbour. OK, Cherbourg, then. Yes fine in theory, but that northeasterly was a good force 5 outbound, with a forecasted 5-6 homebound, and on the nose to boot. So probably not the best option for a crew that had not sailed together before at night.

But that wasn't going to spoil our fun. Over a couple of glasses and plates of mediocre nosh at the Ketch Rigger, our skipper Giles Bancroft suggested a circuit plus-a-bit of the Isle of Wight with an overnight at Yarmouth on the Friday and a jaunt to Old Harry Rocks on Saturday, returning via Poole harbour entrance to build up our sea miles.

And what fun it was. The crew comprised Carlo Tarantini, Tom Munday, Cassie Gleeson, your author Simon Hills plus Florian Wernig and his son Ludovico joining us from Itchenor SC as part of our brand-spanking new reciprocal agreement with the club. I tell you what, even at 5am - well, give or take - this crew was straining at the leash.

So was the boat. Petruchio bounded down the Solent and, with full genoa and a reef in the main, got stuck into the chop after rounding the Needles to head out into the Channel. Again to keep the miles coming, a waypoint was set around five miles off St Catherine's Point, making for a tasty upwind leg to Bembridge Ledge, exciting stuff for those who didn't succumb to seasickness and those who did, did so with uncomplaining dignity. A big shout should be made for Ludovico, who at 14 years old and with an almost permanent grin, belied his age with some masterful upwind helming.

Stomachs recovered for the downwind leg back east, and it only remained for Giles to achieve the impossible at Yarmouth Marina, ie, bringing a boat gently to its allocated berth with 20 knots of wind up its behind.

We had more of the same over the next day's passage making contact with the eastern point of the Jurassic Coast. There was lots of wind, lots of terrific sailing, and, even with two Coastal Skippers, two Day Skippers and three more than competent crew, as always lessons to be learnt and experienced gained, right up to our final day's upwind passage back to Hamble. And yes, we did beat that Fairview charter boat tacking back up the Solent eventhoughweweren'treallytrying didn't we?

Thanks, Giles. We had a blast.